Does your cat have Hyperthyroidism?

Is your feline friend behaving oddly? No longer grooming? Drinking like there’s no tomorrow? Constantly pestering you for food but losing weight?  If so then your cat may be suffering from hyperthyroidism.

Hyperthyroidism is a relatively common condition of the older cat (ages 7 upwards). As the word may suggest this condition occurs when the thyroid gland situated either side of the cats trachea (windpipe) produces too much thyroid hormone. The reason it does this is usually due to a benign (non-cancerous) tumour or hyperplasia (overgrowth of thyroid tissue resembling a benign tumour) of the thyroid gland, however in rare cases the growth may be malignant (cancerous).

Having too much thyroid hormone circulating in the body can result in the symptoms mentioned earlier. It can also result in your cat having an extremely high heart rate with an irregular rhythm which can be picked up on consult, if left untreated can result in an enlarged heart and consequently heart failure. Their blood pressure rises significantly, sometimes so high the kidneys can be irreparably damaged; also vessels can burst in the back of the eye due to the high pressure resulting in blindness.

Hyperthyroidism is easily picked up on a blood test where we test for the thyroid hormone, due to its effects on the kidneys we also check these with a blood test and a simple urine sample. It is also advisable to check the blood pressure of these cats.

Hyperthyroidism can be managed in cats in several different ways: 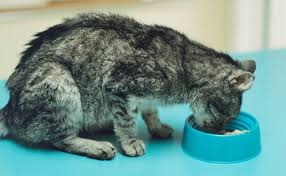 If you think your cat may be suffering from hyperthyroidism or is generally elderly and you would like a thorough health check-up, please contact us to book an appointment at Midwest Veterinary Centre.

About the Author: Midwest Vet Centre